The concept, funding, and volunteer-led construction of First National Bank of River Falls Field is something the greater River Falls community should always be proud of. We know other communities and individuals have the same dreams, so we've tried to preserve the beginnings of our project here on the web for public use. If you have any questions about the evolution of First National Bank of River Falls Field, and how that might apply to your own project, please don't hesitate to reach out to the RFBC. We love talking about our ballpark! 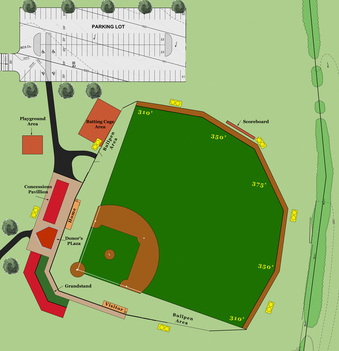 The Community Ballpark Project is designed to fund a lighted, city stadium-style ballpark in River Falls at Hoffman Park East. The field will host an estimated 70-80 baseball games per summer.

The ballpark would serve as a home to:

Stadium-style seating could also accommodate other local events, such as concerts or civic ceremonies. 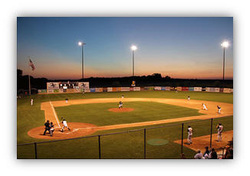 Jack Ruhr Field, Miesville, MN
The River Falls community has expressed an interest and growing appetite for watching baseball. The River Falls Fighting Fish, a men’s amateur team, has been able to draw between 100-150 fans per game at the high school field. A stadium-style ballpark would draw several more fans, such as the 300-400 average attendance in Osceola, Wisconsin at Oakey Park or Jack Ruhr Field in Miesville, MN.

A lighted field would allow the American Legion and high school teams a chance to host regional, sectional, and even state level tournaments. Further, it would allow parents and families of those teams to attend more games. Currently, high school and legion games must start no later than 6:00 p.m., when several family members of players are still at work.  Most legion programs schedule nine inning games or doubleheaders, both of which are not possible without lights.

While the current playing field at the high school is suitable for playing baseball, minus the lack of lights, it is not a suitable location for our community fan base, many of who are over the age of 60. The facility lacks bathroom facilities, shade, and parking, and includes a hilly, long walk from the nearest parking lot to the bleachers. As the population of River Falls continues to age along with that of the United States, the demand for affordable entertainment, such as free local baseball, in a comfortable setting, will only increase.